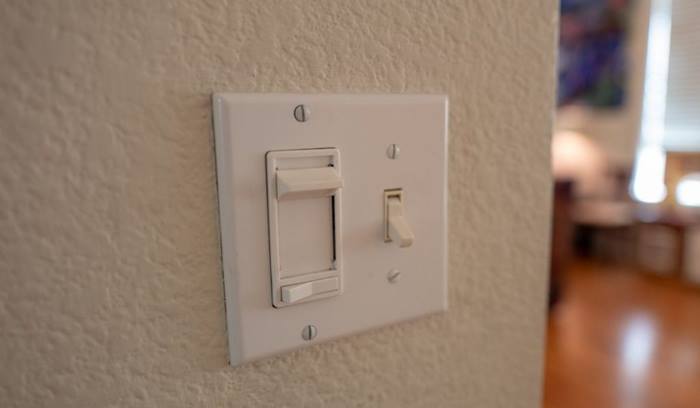 Who doesn’t love dimmer switches? They make life simpler with the remote control feature to control many lights all over the place.

But the most common problem with these dimmer switches is whether it controls a ceiling fan as efficiently as bulbs or not.

Standard dimmer switches are more likely to overload, overheat and damage the fan motor. The good news is that you can use specially designed fan controller dimmer switches for your ceiling fans.

Get professional help for the setup and enjoy the breeze.

Will a Dimmer Switch Control a Ceiling Fan?

According to a report, the average U.S households use a ceiling fan for over six hours daily. It creates a yearly usability of 99 kilowatts.

Most ceiling fans come with a light kit to add lights to your cool air experience.

A dimmer switch is provided with the fan to control the light levels. You might also get a remote-control device with the unit.

So, the dimmers are the smart switches that improve our surroundings. They regulate voltages within an electrical box.

They work best to control light intensity, create ambiance and save energy. While a dimmer switch on the ceiling fan fixture controls different speeds.

It would be best to remember that using the wrong dimmer switch for your ceiling fan can result in severe damage.

Standard dimmers are mainly built for the light fixture and are not intended for use with a fan.

Risks of Using a Dimmer Switch for Ceiling Fans

You can practically encounter issues if the functionality of your dimmer switch does not align with the ceiling fan.

The reason behind this is the making of most dimmer switches. They are specifically designed to control ceiling fan lights.

In some cases, people also witnessed an electric fire in their houses, which was very dangerous for their loved ones in family, pets, and belongings.

It indicates that using a common dimmer switch to control your light bulbs and ceiling fan is convenient, but the risks are even higher.

Tip: Turn off the dimmer switch you installed earlier and check if it is compatible with your ceiling fan.

Fan speed controllers can be used for a compatible motor of the fan. These are not the same as dimmer switches.

So, a typical dimmer switch should not be used as a motor high or low-speed control switch.

Wiring a ceiling fan to a standard dimmer switch is most likely to affect the ceiling fan use by burning it up and damaging it potentially. It becomes a host of problems.

How to Check if Your Dimmer Switch is a Fan Controller or a Light Controller?

The most common type of dimmer switch is the one that allows light control. If you have shifted to a new house, you might be wondering if it is for your new ceiling fan or its lights.

You should know how to find the right kind of dimmer switch.

Check the right dimmer easily, and follow the steps given here:

To stay safe and sound, you should opt for a ceiling fan dimmer switch. While buying one for your home, focus on the following points to check its compatibility with your ceiling fan:

The ceiling fan dimmer switches come for three-speed or four-speed fans. You must purchase a dimmer switch that matches the speed of your fan.

Ceiling fans also differ in amperage. The label of your ceiling fan will show you how many amps it uses.

Mostly, ceiling fans use 1 amp or less. The 1.5 amp switch is the best fit for ceiling fans. If your fan has a higher amperage, find a switch that can handle 2.5 amps.

You will get installation directions with your new ceiling fan dimmer.

Fan and light dimmer switches allow you to control light and fan independently. A dual switch installation requires you to connect each wire from the wall to the corresponding wire on its switch using wire nuts.

In some cases, a dual-fan and light dimmer connects to only one switch. You can’t control it separately from the light switch.

However, you can rewire it with a separate set of wires to gain control. You’ll need some advanced electrical skills or professional assistance.

Few Other Quick Fixes to Make Your Dimmer Switches Safe

As mentioned earlier, using a standard dimmer switch to control the ceiling fan’s electric motors is not recommended. Implement any of the following to get your dimmer switch issue resolved:

Note: The device comprises a wireless remote and a receiver that gets wired up to the fan directly. These devices are compatible with any ceiling fan speed and they work very well.

The rotating fan blades of ceiling-mounted fans rotate their blades to improve air circulation. It gives a cooling effect.

Some ceiling fans also have a light set up in the center that can be used as a light source. Having a ceiling fan in the room adds beauty to it.

Ceiling fans are operated with electric power generated using a switch to turn it on or off.

The mechanism also includes a feature of controlling fan rotation speed. Here the dimmer switches define their job, to change the brightness of the light.

Dimmer switches on ceiling fans change the game. They improve your user experience by allowing you to control both significant aspects of your room.

The light dimmer switch does not require complex installation procedures. An expert electrician does it in no time.

When your fan’s dimmer switch is being used for a long time and is overloaded, it will affect the fan motor.

As a solution, separate the light bulb wiring from the fan. Use a standard toggle switch as a fan speed regulator to control the ceiling fan’s speed. Let a dimmer’s smart switch control light levels.

A dimmer light switch should only be used for controlling lights for being compatible with the dimmer switch. You should avoid wiring it as the main controlling source for a ceiling fan.

Ceiling fans not only cool a room, but they also provide a lighting kit where you install light bulbs. Dimmer switches serve to regulate both the fan speed and intensity of the light.

However, normal dimmers are prone to overload and overheating.

You can install a dimmer switch as a DIY project too, but seeking professional help will free you from all the stress of wiring and installation.